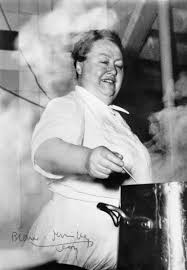 For me Eugenie Brazier was an easy translate, more of a detective story finding out all those recipe that various chefs and writers had borrowed uncredited down the years. Although it has to be said that Eugenie herself went on her own grand tour of restaurants for a month every year (a habit she learned from her first employer who took her to the south of France) to research new recipes) but, equally, her beurre blanc, her scrambled eggs, her vinaigrette these are the proper stanchions of French cooking as handed on to Paul Bocuse and Alain Pacaud (who both trained with her) or that bowled over contemporaries like Fernand Point. It struck me as a sign of Britain’s insularity that this book could be overlooked for almost 100 years since she first opened her little boite in Lyons, which is still there you you fancy a gastro tour of your own..

Trickier was the alkaline series from German, well not so in fact because Stephan has excellent English and dictated most of it to me from the top of his head. The recipes were more difficult but at least an onion is an onion in the universal language of the kitchen. You can see some of rthe development work here at the alkalinecanteen.com.